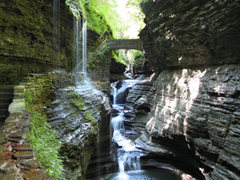 We are heading to Corning Glass Museum - in western New York, which is dedicated to the history, art, and science behind glassmaking. Next, we will visit Watkins Glen State Park in New York State which is an amazing canyon with more than 20 waterfalls. Later, we are going to see the renowned Niagara Falls. Overlooking American Fall, the Horseshoe Fall and the Bridal Veil Fall, you will be astounded by the deafening roar of the falls. It's the combination of height and volume that makes Niagara Falls so beautiful.

Follow the tour along the Niagara River to the Old Fort Niagara, learn the history and enjoy the beautiful scenery of Niagara area. The significant location of Old Fort is right next to Lake Ontario. Later coming back to Niagara Falls, explore more. Return to New York for accommodation.

Today we will drive to Philadelphia, PA, the birthplace of the United States. Here, we will visit Independence National Historical Park. Afterwards, we will head to Washington D.C. Monuments, museums, and Americana characterize this historic city.

The whole trip was a fantastic experience with a fantastic itinerary and a great tour guide/driver. We were transported through a Mercedes Benz mini bus which was perfect for that journey. The trip was comfortable along with the stay. I would recommend this for everyone whether it be a family or individual. Lastly, a shout-out to our tour guide Jason for being a great help for us throughout the trip.

It was my first trip with Take Tours. The trip was nicely planned and well executed. The time spent at each location was quite reasonable. Our guide Rex was very good. Only issue was the "Day Inn" hotel in Batavia where we spent the first night. The free breakfast next morning was with very limited options.

I really enjoyed the entire trip. It was smooth, on time and pleasant trip. The tour guide was excellent. Staying very close to Niagara falls was the best part as its very convenient for you to go back to see falls and colors at night as well as fireworks. Its in vicinity of all types of food/cuisines. The tour guide/driver would stop every 2 hours for rest room and to strech your leg as well. Entire trip was enjoyable and I would do it again. Thumbs up!!

We are senoirs and were very concerned before going on this trip with the bad reviews. But I was more than satisfied after the trip. Was picked up in a new van because there was only 6 of us including the driver, Kei Chan. There was no tour guide. Even without a separate guide, it was a wonderful trip. Kei shared what information he knew on each stop, was an excellent driver and always on time. I truly hope that his management reads this and acknowledges Kei for all his efforts. The routes were very scenic with very few interstates. My friend had never been to Niagara Falls and she enjoyed it too. 5 stars given by me on our trip.

Excellent Trip! We travel with our parents and it was great experience to Niagra. Tour Guide plan trip so nicely. I would definatly reco. to you all. Thanks for making our first Niagra Trip is wonderful. Great place with great planner!

Great guide, gave us time at every place to make sure we enjoyed our trip. Very accommodating and made the trip fun!

Our trip to Niagara was wonderful. This was our first trip with TAKETOURS. Nathan, the guide & driver took good care of us throughout the journey. On the first day we reached Watkins Glen state park. Instead of climbing from the bottom, as others were doing, he took us to the top of the glen, thereby making it easier for us to come down through gorge and enjoy the flora and fauna of the canyon. After covering about 400 miles he gave us a break at Days Inn, Batavia. Next morning we moved straight to Niagara Falls. At every point our guide was with us, till the entrance so we did not have any difficulty or time loss. We enjoyed IMAX show about Niagara Falls, Maid of the mist boat ride, Trolley tours, Old Fort and Whirlpool state park trip very much. At the evening the traditional American dance show was colorful. Here also we stayed at Days Inn, Niagara. From our seventh floor room we got a clear view of Canadian city side. At the evening we walked down to the falls side to have a look of falls illumination. The illumination of the falls was superb. Next day, on our way back to home, we visited Hershey Chocolate factory. It was a new experience, particularly making of own chocolate bar. Last day we covered about 500 miles (800 KM), but the journey was so smooth that we were not much tired. Our trip to Niagara was more than successful.

I did the tour with my family, and we loved the tour attractions, the tour guide was professional and kind, and the transportation was comfortable.