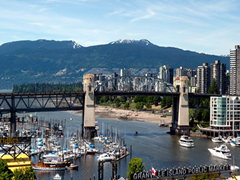 Today, we will take a pleasant city tour of Vancouver. We will go to visit places like Chinatown, Gastown, Canada Place, the Olympic Cauldron, Stanley Park. You can also choose to walk on the Capilano Bridge at your own expense. Then we will move to Queen Elizabeth Park.