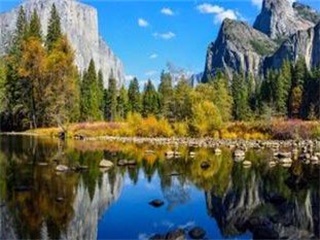 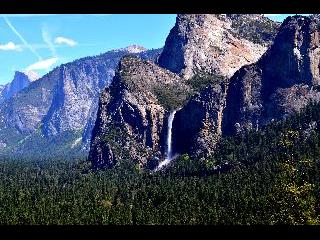 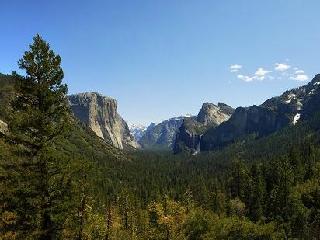 When going through Yosemite Valley, we'll stop for around 3 hours to see El Capitan, Half Dome, Yosemite Falls, Bridalveil Falls, Inspiration Point (otherwise known as Tunnel View), and Yosemite Village. After a 1 hour lunch break at the Yosemite Lodge, we'll drive to a higher altitude and to a lesser traveled part of the national park.

Here, we'll stop beneath the Giant Sequoia Tree Grove and see the world's largest living organisms.  After a 2-mile (1 mile per way) hike (around 1.5 hours) to see the Giant Sequoia Trees, and a full day in the fresh Yosemite air, we'll finally head back to San Francisco, where our bus will drop travelers off at directly at their hotel.

Winter Months Note: The Giant Sequoias hike depends on snow levels and trail conditions from October to May, so the route and itinerary may be changed due to snow depth, road conditions, construction projects and detours and it cannot be guaranteed.

My guide tried to cover every point of attraction in spite of tourist rush in weekend. I recommend this tour.

The tour was very nice and the driver/ guide was very good. He tried to cover every point of attraction in spite of tourist rush in weekend. I recommend this tour.

OUR GUIED WAS VERY INFORMED AND SHARED A LOT OF STORIES WITH US, IT WAS A GOOD EXPERIENCE, ESPECIALLY IF YOU DON'T WANT TO RENT A CAR AND GO BY YOURSELF

It was an AMAZING trip! I highly recommend taking this tour if you do not have time to hike/camp at Yosemite. I took my parents here and they absolutely loved it. The tour guide, Denise, was an added charm to the whole trip. Her energy and enthusiasm added on to ours and made it all worthwhile!

Nice tour. I reserved late night for Christmas for Yosemite just a day before the tour. Their response was so quick and also guided tour was awesome.

Our 1 Day trip to Yosemite was amazing. Ben was an exceptional driver and guide throughout the entire day. He is an incredibly safe driver (given the endless corners and elevations) and was an exceptional guide in the information and knowledge shared throughout the day. I highly recommend this trip and Ben to anyone interested in a great day with a friendly and courteous guide

I had fun on this tour, very informative and cognitive. Gino is fun, punctual and simply great!

The tour was great, really well organized, the bus was comfortable and the places visited were amazing. Special thanks to our guide/driver Roman, he was always fast with a good sense of humor and his stories were really entertaining.

Overall a very good experience. Unfortunately we could not go inside the Yosemite Valley due to fire, but they informed well in advance about the itenary change with options to change the trip date or choose other tours.

Our guide/driver Denise was the best guide we ever had. A brilliant driver, superbly knowledgeable, fantastic communicator and most charming. I cannot recommend enough any tours run by her company Extranomical, if it was guided by Denise!