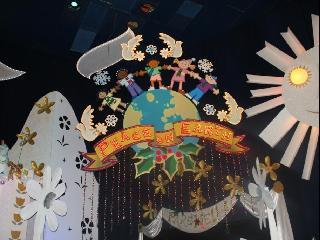 Depart for Los Angeles in the morning. Our city tour will take you to famous places, such as Walk of Fame, the Chinese Theatre, the Dolby Theatre in Hollywood, and Olvera Street for Mexican culture. We will pass by Walt Disney Concert Hall and Chinatown. Lodging in Los Angeles.

Guests have multiple options for today's itinerary.
Option A: Guests can choose to go to Disneyland or Disney's California Adventure.
Option B is to visit both of Disneyland and Disney's California Adventure with a special hopper ticket.
Option C is a trip south to San Diego to sightsee around the city and visit SeaWorld.
Option D is to take the San Diego city tour and visit Balboa Park.

Today we will spend the day at Universal Studios Hollywood, the combination movie studio-theme park that is perfect for any fan of Hollywood magic..

Today we will pass by UCLA , then we will enter Beverly Hills and wander by Rodeo Drive. On our way back to the pickup points in San Francisco, we will stop at the Santa Monica Pier. Guests may also opt to depart from LAX, but no transportation to the airport will be provided. See "Departure and Return Details" for pickup and dropoff information.

This Trip was very good and special call out for our Tour Guide Louis, he is the best among all the Tour Guides I have met so far with Take Tours. Kudos for Louis

Amazing, good time spent and enjoyed family vacation. Our travel guide Tommy planned wonderful trip for us and everything was perfect with options to have vegetarian meals, super market, etc.

My mother-in-law went on this trip. She said it was a good trip overall. The only complaint was that she was not given enough time to explore Seaworld in SanDiego. Also the tour guide did not give her the park map.

Nice tour and itinerary ,tour guide helped us navigate through universal studios shows and rides ,we were able to do all rides on time ,we got to see places which we would have missed driving . Only drawback is ,bus stops at mostly Chinese buffet restaurants ,it's hard to find good food for older parents .

The tour was good and the guide was very helpful. The itinerary was completed but not in the same order, but that didn't bother us. There was ample time at the each place. We opted for Disney and Universal Studios and both were well covered. I have used gotobus several times before and this was the first time with take tours. The trip was done by Joy tours. The only thing which could have been better is that at the end of the trip, I was dropped off at the Joy tours office instead of the airport and I went in to use the restroom but they said it was only for employees and it was quite rude.

Had a good trip. The tour guide ensured all the places were covered though Day 1 the city was closed. He also guided us through Universal Studios which ensured we did all the rides. He also waited an extra 30 minutes as we wanted to catch the special Shamu show at Sea World. Only drawback was he spoke 100 lines in Chinese and 10 words in English.

Overall it was a nice experience. It would have been better if they gave enough time for site seeing.

Awesome! Even after having issues with the mud slide, the tour guide helped us to see all. He helped us to get rides very easily. He was always helpful.

This trip was awesome. We could cover all the shows and rides without much waiting time on designated time. Hotel accommodation was good. If you want to visit all the rides and shows quickly then it would be the best.

This was my parents first trip in the United States. Initially they were very scared as they could not understand the accent in U.S. But on this tour they were very happy, as the guide was so helpful and they could understand everything. They were so happy after this trip that they went on another trip after coming back.