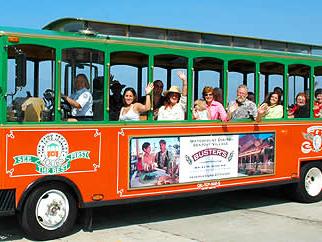 Fully narrated sightseeing tours of America's Finest City and Coronado. It makes 10 stops so you can disembark along the way and enjoy Old Town, Seaport Village, Horton Plaza, Balboa Park, Coronado and the San Diego Zoo.

Guests may hop on and off the trolleys and spend as much time at each attraction as they please over a 24-hour period. Alternatively, passengers can ride the trolley from one end of its line to the other and enjoy a two-hour completely guided and narrated tour of the city of San Diego!

Nice Tour and will recommend to friends.