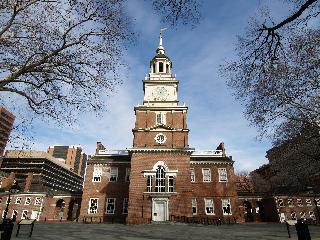 Today, we are going to explore the Big Apple, New York City.
Financial Center: We will walk on the Wall Street, and visit Trinity Church, New York Stock Exchange and Federal Reserve Bank of New York. You will also have a chance to take a picture with the statue of George Washington and the Charging Bull. You can get on top of the One World Trade Center to overlook the city. (If One World Observatory is closed, Empire State Buiding will be the replacement) .
American Spirit : Then we will take Statue of Liberty Cruise getting a view of Manhattan, Statue of Liberty and photo with Brooklyn Bridge, followed by Intrepid Sea, Air and Space Museum .
Landmark exploration: Explore the famous landmarks of America by visiting Times Square, NASDAQ Stock Exchange and Broadway theatre.
Best of the world: Take an in-depth tour of the Metropolitan Museum of Art or walk in the Central Park.

Today we will enter Hershey Town to visit Hershey's Chocolate World , see the whole process of chocolate production. Then we will go to visit Corning Glass Museum. We will also go to visit the Watkins Glen and Finger Lakes (*Considering of the time/traffic/weather). After that, we'll drive to Niagara Falls and have a chance to take the Colorful waterfall tour.

Today we will visit the Niagara Falls where we will take the Touching Niagara Fall. When back to the shore after the end falls, we will come to the foot of the waterfall by following the tour guide. Afterwards, we come to state park, where are many amusements and small shops in the summer, and sometimes a local flea market, selling local Indian artifacts. You can choose enjoy free time or take an optional Niagara Scenic In-Depth Tour. Afterwards, we will continue to Boston. We will take a World-famous university tour including the Harvard University and passing by Massachusetts institute of technology. After we arrived at Boston China Town, you can enjoy Boston Lobster Meal on your own expenses.

In the morning, we will first see the World-famous Building of Boston. Then brings you a deep tour of walking to Boston Freedom Trai. Afterwards we will take a Revolutionary Cradle tour. For those guests who leaving the tour from New York, we will exclusive offer free attraction - Yale University. Please refer to the "Departure & Return" for more details about pick up and drop off.