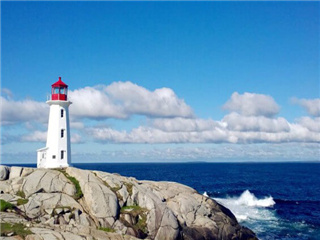 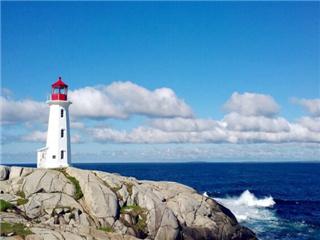 Today we will departure  from Montreal at  6:00 am. After Lunch at Edmoundston, our first stop will be Hartland Covered Bridge, the world's longest covered bridge. We'll then visit the Covered Bridge Chips factory, where they use Canadian potatoes to make delicious snacks. We'll also head to Reversing Falls, near the Bay of Fundy.

This small city in New Brunswick was founded in 1850, but the area had been settled by Indigenous People long before that. It is located in the New Brunswick "panhandle" at the northern tip of the Appalachian Mountains.

After breakfast, we'll stop by Hopewell Rocks, where the highest tides in the world occur twice a day. Next, we'll continue to Prince Edward Island, with a stop by the Confederation Bridge, one of the longest bridge in Canada. Then We'll visit Charlottetown, the capital of PEI, the  Green  Gables  House  and see  PEI's  famous beautiful red beaches in Cavendish.

We'll first go to Peggy's Cove, a beautiful quaint town known for its rocks by the harbour and its lighthouses. We'll also visit Halifax Citadel, a set of military fortifications from the 18th century. Later, we'll tour the city of Halifax on an amphibious vehicle Habour Hopper. We'll end the day with a classic lobster dinner by the harbour.

We will go to Magnetic Hill, an unusual natural phenomenon near Moncton where cars seem to go uphill by themselves! We'll also see the world's largest statue of a lobster in Shediac, the lobster capital of the world! Hotel in Barthurst.

A Canadian town in New Brunswick known as the "Lobster Capital of the World". It hosts an annual festival every July which promotes its ties to lobster fishing. At the western entrance to the town is a 90-tonne sculpture called (perhaps inaccurately) The World's Largest Lobster.

In the morning, we will go to Perce Rock, and then we will take a cruise around the Perce Rock and Bonaventure Island, a must see in the Gaspé region. We will explore Forillon National Park. It is situated at the tip of Cap Bon-Ami, and offers gorgeous views of cliffs and diverse wildlife. Hotel In Gaspe.

Perce is a small city near the tip of the Gaspe Peninsula in Quebec, Canada. Within the territory of the city there is a village community also called Perce.

Gaspe is a city at the tip of the Gaspe Peninsula in the Gaspesie-iles-de-la-Madeleine region of eastern Quebec, Canada. It is known for its large snow falls during winter and high gusts of wind year-round.

After check out, we will head to Rimouski, where we will visit the Maritime Historical Site of Pointe-au-Pere. We will be back in Montreal.

Rimouski is a Canadian city located in the Bas-Saint-Laurent (Quebec) region at the mouth of the Rimouski River. In November, the town is the host of the yearly Salon du Livre de Rimouski, the oldest event of the kind in the province of Quebec.

It was a fantastic experience with wonder travels. We get a superb service, well organized trip and amazing experience and that too in a reasonable price

We went on a 6 day tour to Gaspe, Maritime Provinces and Quebec City. Everything was well planned with a multi-lingual guide and the driver is fantastic.