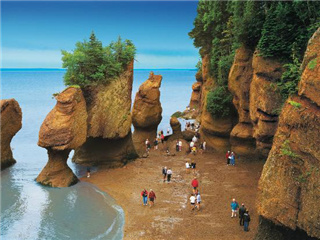 From USD $279.65
ChatNotify me when available
Buy 3 Get 1 Free 5% Group Discount1. Receive 5% off when you purchase 3+ rooms on the same tour (single order only).
2. Receive 3% off when you book 3+ multi-day tours with minimum order total of $500 at once. Not valid in conjunction with any other discounts or pricing offers.

Today we will departure  from Montreal at  6:00 am. After Lunch at Edmoundston, our first stop will be Hartland Covered Bridge, the world's longest covered bridge. We'll then visit the Covered Bridge Chips factory, where they use Canadian potatoes to make delicious snacks. We'll also head to Reversing Falls, near the Bay of Fundy.

This small city in New Brunswick was founded in 1850, but the area had been settled by Indigenous People long before that. It is located in the New Brunswick "panhandle" at the northern tip of the Appalachian Mountains.

After breakfast, we'll stop by Hopewell Rocks, where the highest tides in the world occur twice a day. Next, we'll continue to Prince Edward Island, with a stop by the Confederation Bridge, one of the longest bridge in Canada. Then We'll visit Charlottetown, the capital of PEI, the  Green  Gables  House  and see  PEI's  famous beautiful red beaches in Cavendish.

We'll first go to Peggy's Cove, a beautiful quaint town known for its rocks by the harbour and its lighthouses. We'll also visit Halifax Citadel, a set of military fortifications from the 18th century. Later, we'll tour the city of Halifax on an amphibious vehicle Habour Hopper. We'll end the day with a classic lobster dinner by the harbour.

We will go to Magnetic Hill, an unusual natural phenomenon near Moncton where cars seem to go uphill by themselves! We'll also see the world's largest statue of a lobster in Shediac, the lobster capital of the world! Hotel in Staint John.

A Canadian town in New Brunswick known as the "Lobster Capital of the World". It hosts an annual festival every July which promotes its ties to lobster fishing. At the western entrance to the town is a 90-tonne sculpture called (perhaps inaccurately) The World's Largest Lobster.

In the last day, we will have free time to visit Quebec City, a unique fortified city in North America and a witness to the Battle of the Plains of Abraham.  Also, you could get on the roof of Quebec: the Capital Observatory, located on the 31st floor of the Marie-Guyart building. In the end, we'll be back in Montreal.

That was a great trip. The bus is very comfortable. The guide is funny and patient! Hope we can go again sometimes.

It was very easy to make the purchase and choose the dates we wished to perform the tour. I love the variety of tour they offer. We've enjoyed the transport service, the driver is nice and his bus is in excellent condition, clean, air conditioning in perfect operation. In our tour we had the fortune to have an excellent guide, Lim is a very cordial and organized person, she is respectful, funny and very creative. We'd be back to take the services that Wonder Travel offers with a guide like Lim.

It was an excellent experience for this 5 days travel in Maritime Provinces and Quebec City! The whole trip was actually way better than my expectation. We had buffet for each meal and the room was clean and cozy. The whole trip went super smoothly from the beginning to the end. Highly recommend!

I went to QUEBEC city with a group of people at this inc. it is really wonderful. We can speak Chinese, English and French in this trip. The food for lunch is so nice too.

Richard was very helpful and friendly. We really enjoyed the tour.