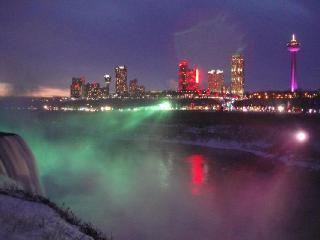 When guests arrive at the Montreal airport, they will meet with their guide and transfer to the hotel for the night.

Start your morning sightseeing with the Montreal Tower, and one of the world's greatest botanical gardens. Afterwards, we will head to Mount Royal. You will then visit the famous St. Joseph's Oratory. Stop at Maple Syrup farm for lunch. We will continue to the Hotel de Glace which is the only ice hotel in North America. Then we will visit Old Quebec City. Check out the Fortifications of Quebec, Chateau Frontenac. You can also have a delicious French dinner in the romantic city.

After breakfast you may choose to join optional tour - Dog Sledding. Then we will start your way back to Toronto via Thousand Islands. You will have chance to take the Thousand Islands Helicopter Ride. Arrive Toronto in the late evening.

We will depart in the early morning to drive to Niagara Falls. Upon our arrival, we will get to see the thrilling IMAX Movie to learn about the history of this beautiful area. Then, we will get to ascend to the top of the Skylon Tower for a magnificent panoramic view. After lunch visiting the world's largest free-flying Indoor Aviary Bird Kingdom. Lastly we will pay a visit to the Niagara wine region for a taste of icewine before heading back to Toronto. Guests should arrange their departure flights for after 8:00pm. Please see "Departure and Return" for more detailed information regarding when to book flights.