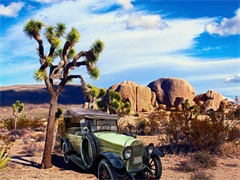 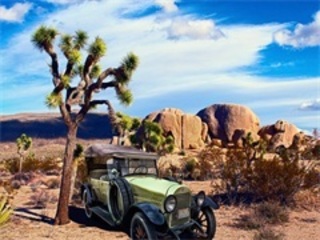 Upon arrival at the Los Angeles airport, we will transfer to the hotel either via the hotel's shuttle (Airport Option) or on a seat-in basis (Downtown Option).

Today we will drive from Los Angeles to Las Vegas, NV. Upon our arrival at night, guests will be able to explore the city as they please.

Today we will enjoy a day of leisure in Las Vegas. Visit some of the spectacular hotels, take one of the many optional excursions offered or simply relax by the pool. Las Vegas has something for everyone so just take the whole day to explore this world-famous city.

Today we will make our way across the Mojave Desert to High Sierras and the resort town of Mammoth Lakes, CA. This picturesque locale in the Sierra Nevadas is a popular tourist spot because of its beauty.

Today we will head to Yosemite National Park and spend our day exploring this natural wonder.

Visit to Yosemite may be limited because of the wildfire and we may need to skip or bypass some attractions. As wildfires are Force Majeure, we will not be able to entertain any claims pertaining to missing sightseeing, relocation or any other steps we may have to take in order to guarantee a smooth operation of the tour and guarantee the safety of clients.

Leaving the Yosemite area, we will travel to Carmel located on the Pacific Ocean. From this quaint and charming village, we will travel along stunning 17-Mile Drive to Monterey. Continue northward to San Francisco.

Officially called Carmel-by-the-Sea, this coastal Southern California town is known for its amazing scenery as well as its art scene past and present. Former mayors include Clint Eastwood, Perry Newberry, and Herbert Heron, among other artistic icons.

In the morning, we will tour San Francisco, visiting places such as Union Square, Chinatown, Golden Gate Park, Fisherman's Wharf with a view of Alcatraz Island across the bay. Afternoon at leisure or embark on an optional tour to the village of Sausalito.

Sausalito is north across the Golden Gate Bridge from San Francisco. It is the home of Vista Point, the Marine Mammal Center, and beautiful views of San Francisco Bay.