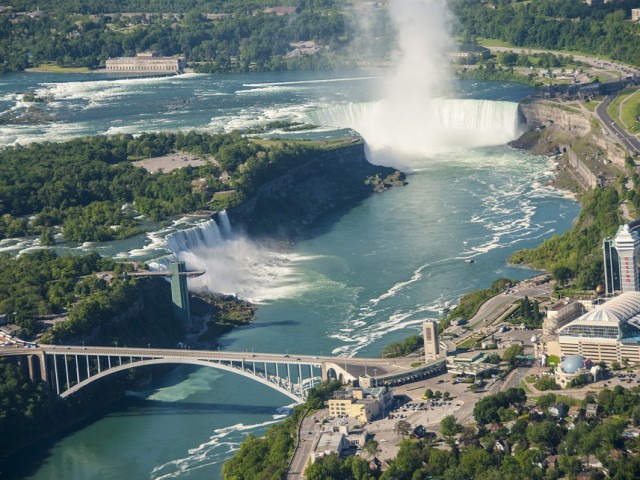 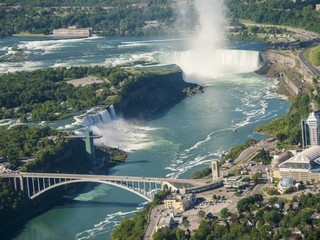 Driving through the hilly countrysides of Pennsylvania and New York state, we will enjoy the rural scenery as we head north to visit the Corning Glass Museum in Corning, NY. We will then continue on to Watkins Glen & Finger Lake. Later, we will arrive at Niagara Falls to take a Niagara Falls Night Tour.

In the morning, guests will then visit the Whirlpool State Park, Old Fort Niagara. Then, we will have the chance to ride the famous Maid of the Mist, Jet Boat and hve a Daytime View in Niagara Falls . Afterward, we will drive south to New York City.

Passengers will be picked up in the morning. Today we will embark on a tour of New York City. We will passing by NYC Trinity Church, and our first stop will be the Wall Street, where we can see the world's famous stock exchanges, as well as the signature sculpture, Charging Bull. From there, we will take a Statue of Liberty Cruise. After, we will pass by Rockefeller Center, Fifth Avenue, and stop at the One World Observatory (will visit Empire State Building instead if close). Our day concludes with visits to Times Square, Madame Tussauds Wax Museum, Metropolitan Museum of Art (will visit Museum of Modern Art instead if close).

Today we will drive to Philadelphia, PA, the birthplace of the United States. Here, we will visit Independence National Historical Park. Afterwards, we will head to Washington D.C. Monuments, museums, and Americana characterize this historic city.

All purchases are subject to re-confirmation within 2-3 business days after booking. Please do not book the airline tickets until you received the confirmation.

Yo Yo, the tour guide was professional and pleasant. The tour had a longer travel time, the trip was enjoyable for first time visitors of new places like us. As promised, seats were rotated, we stopped for the rest room and tackled much of the places as listed. The bus was fine, there were even outlets to charge smart phones. Finally, the cost was very good. You get 4 tickets for the cost of 2.

with the cheap price, i wasnt expecting too much, but hotel was great and tour guide was very professional and nice. It's a long way but its worth it. Would recommend to friends and family.

Love it !! Our tour guide Ivey... very accomodating and personable.

We recently took 4 day tour and we enjoyed very much. Tour guide Tana Cairen was nice and professional. She made sure to explain us in English. I 'd give extra credit to the driver Mr.Deng Wei Zheng (Bus # 1138) as it was snowing around Boston, but he made it on time. Overall the trip was worth the money we paid.

After reading the mixed reviews in every link, I decided to book this trip for the very last minute. I took the risks! Thus, I knew I would be sitting in the back of the bus as learned. The success of this 4 days trip lies on two people - the driver of the bus and the tour guide. They BOTH had good team work. Although the bus has no luxury (i.e. no oulet,wifi), the driving by him was trusting and comfortable. You can tell that he is an experienced one thus, I applaud his work. Our tour guide (Lui) as he introduced himself, was a matured individual, very responsible, accommodating, and well versed in the English language. He provided his contact number before the trip started, and answered our calls if we wanted to verify small things. Despite a longer travel time, the trip was enjoyable for first time visitors of new places like us. As promised, seat were rotated, we stopped for the rest room and tackled much of the places as listed. Although hotel bookings were unknown until the day itself and was far away from destination, it was a nice place overall. Thanks much again to the driver and Liu- it wouldn't have been a nice experience without all the hard work and effort that you'd exerted between the days July 11-14, 2014. You deserved that CREDIT! Marina, the other guide that was with us on our ride back to Washington D.C. Well, I'm glad the trip was over because she was more busy on her cell phone all the time rather than her customers.

The tour was quite enjoyable. The hotels were very comfortable. The tour guide could have catered a little more to those in the tour who were English-speaking. Also, the tour guide could have said a little more about the things that were being seen, and kept his own views to himself (he said he hated New York, though he loved the U.S.--some people love N.Y. no matter what). The bus was fine--there were even outlets to charge smart phones--but there was a little confusion at the end of the tour when various buses picked up different parts of the group to take them to the proper destinations. Lastly, the cost was very good: 4 tickets for the cost of 2 because of the 2 for 1 discount. Despite everything, I would use the company again for my next tour.

Everything good and the staff is very friendly. Unorganized transfer from Boston to NYC and before you buy the package you are never told that they will just buy you the ticket to take you back to Washington, DC and leave you in the street waiting for the bus. Tour guides smoke when ever they have a chance and if you want to know whats going on you have to follow them even though they are smoking. They dont really let you use the bathroom in the bus unless it is an emergency, but the buses are comfortable. We stop at small rest areas where there are small bathrooms and you get only about 15 minutes, so it is really hard in many occasions. Some times you fell excluded because it seems that they speak more Chinese than English trough the speaker and it seemed that they told some jokes that you never found out. Be aware that the Lobster dinner is Chinese style where they put the food in the middle and you share with about 8 people on the same table. Besides lobster, the other food is really Chinese, not the american Chinese that you see at the malls or other locations.

The tour was really good.