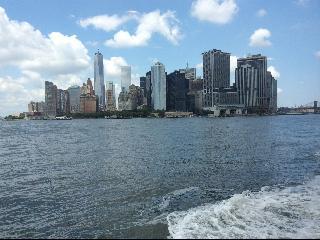 From USD $755
ChatNotify me when available
Buy 2 Get 2 Free 5% Group Discount1. Receive 5% off when you purchase 3+ rooms on the same tour (single order only).
2. Receive 3% off when you book 3+ multi-day tours with minimum order total of $500 at once. Not valid in conjunction with any other discounts or pricing offers. Airport Pick up

Guests will arrive in Boston, meeting tour guide in the baggage claim area of Logan Airport OR at Chinatown ( 81 Harrison Ave, Boston, MA 02111) around 4:30pm, then transfer to hotel at NO extra cost.

Today we will travel from Boston, MA to Newport, RI, where we will visit the Breakers Mansion. We will then head to New Haven, CT to have the Yale University In-Depth Tour. Finally we will drive to New York City, where we will get a chance to see the beautiful lights of the city at night.

Today we will spend the day touring New York City. Stops include the Statue of Liberty Cruise, the Empire State Building, an exploration of the USS Intrepid Sea-Air-Space Museum,you can choose either Ripliey's Believe it or not or Madame Tussauds Wax Museum, and the The Metroplitan Museum of Art.


Note: Guests who participate this tour must at least attend 1 of 6 attractions listed above.

We will travel to Philadelphia, PA in the morning and take a Double Decker City Bus touring the city, then head to Washington, DC to see all of the famous monuments. This is also where we will spend the night.

In the morning, we will continue to explore Niagara Falls, NY where we will see Niagara Falls Adventure Movie and have an in-depth tour that includes visits to the Whirlpool State Park and Old Fort Niagara. From there, we will return to Boston.

Today we will travel from Boston to Climb to the highest peak in New England on the world's first mountain-climbing cog railway! It is combining 19th century innovation with 21st century eco-friendly biodiesel technology. It is also the only cog railway east of the White Mountains! During your trip you will travel over Jacob's Ladder, the second steepest trestle in the world with a 37.41% grade. The engines and coaches are designed and built at the Cog by its crew of talented machinists and craftsmen.

After the cog railway tour, we will go fruit picking, a fun activity for the whole family! you may pick the strawberries, cherries, blueberries, raspberries, blackberries, apples, pumpkins and more in their harvest season. If the fruit Picking farm is not open on the travel date, we will visit Merrimack Outlet instead.

New Hampshire's White Mountain National Forest is home to Polar Caves Park and the beautiful views of the Kancamagus Highway. Be sure to ride the Mount Washington Cog Railway, a train that uses special tracks to climb the mountain!

Today we will tour the city of Boston, MA, visiting the campuses of MIT and take a Harvard University in-depth tour. We may also visit Skywalk Observation Deck at prudential center. Then continue to see the Massachusetts State House, New England Aquarium and Trinity Church. A stop by Quincy Market will give us a chance to eat, you also can have a chance to choose Lobster meal .After, we can take a boat ride in Boston Harbor. At the end of the day, guests will be returned to Logan Airport for their flights home. See "Departure and Return" for more detailed information on when to book flights.