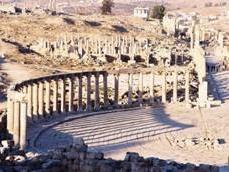 Visit Ancient City of Jerash. Have a Tour in New Amman and Capital City of Jordan. Inclusion: Pick up and Drop off service and a lunch, Entrance fee to Jerash & site guide.

Visit the old and new parts of the capital city of Jordan, Amman, JO, one of the oldest inhabited places in the world. Recent excavations have uncovered homes and towers believed to have been built during the Stone Age.

The first stop on our tour will be The Citadel, where excavations have revealed numerous Roman, Byzantine and early Islamic remains. From there we will head to the Roman Forum, a public square that once was among the largest of the Roman Empire. Next we will visit the Roman Theater, an imposing monument set into the side of a mountain and dates back to approximately the mid-2nd century AD.

Next up is the Odeon, which is nearly 2,000 years old. The lower seats of this monument, which could accommodate up to 500 spectators, have been restored and the Odeon is used occasionally for concerts. Finally, we will visit the Grand Husseini Mosque.

Then we will reboard the bus and proceed on a 45-minute drive north to the best-preserved example of Roman civilization, the ancient city of Jerash, JO. This amazing site features soaring hilltop temples, handsome theaters, spacious public squares and plazas, baths, fountains, and city walls pierced by towers and gates. The Jerash Festival, held in July every year, features folklore dances by local and international groups, ballet, concerts, plays, opera, popular singers and sales of traditional handicrafts.


no show the day of the services day or after - 100% of total purchase amount
Unused features are non-refundable. No shows forfeit entire payment.
There is 6% handling fee add-on to the above penalties.
NOTE: We cannot grant any refunds more than 30 days after completion of tour.